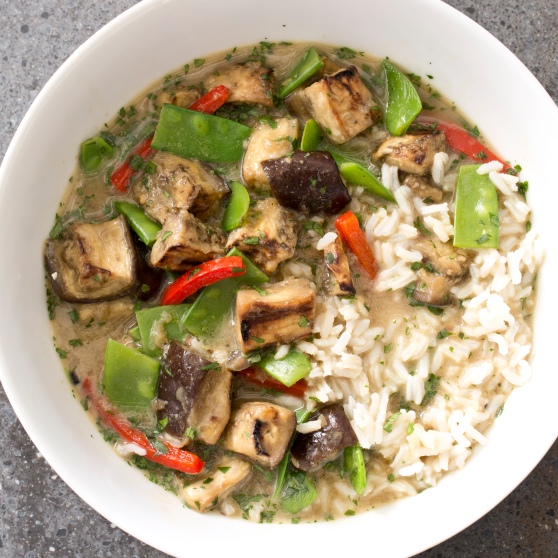 Why This Recipe Works: To create a healthy, vegetable-packed Thai curry in the slow cooker, we turned to eggplant as the star ingredient. Our first attempts, however, resulted in bland, mushy eggplant. Clearly we needed to drive off excess moisture before adding the eggplant to the moist heat environment of the slow cooker. A quick spin under the broiler did the trick and further deepened the eggplant’s flavor in the process. To achieve great flavor without the need for gathering up a laundry list of ingredients we turned to store-bought green curry paste, which contained all the ingredients of classic Thai curries and added big flavor and depth to this dish in record time. A combination of chicken broth and light coconut milk (added at the end) gave us a rich, creamy base for our curry without adding excess calories or fat. Snow peas and red bell pepper were the perfect accents to the eggplant, and to ensure that they were perfectly crisp and tender, we microwaved them with a little water, then added them to the finished curry.

2. Microwave snow peas, bell pepper, and 1 tablespoon water in covered bowl, stirring occasionally, until crisp-tender, 4 to 6 minutes. Drain vegetables, then stir into curry. Microwave coconut milk in bowl until hot, about 2 minutes. Stir into curry and let sit until heated through, about 5 minutes. Stir in cilantro and lime juice. Season with salt, pepper, extra fish sauce, and extra lime juice to taste. Serve.

Cutting up an awkwardly shaped vegetable like e­ggplant can sometimes be a challenge. To cut eggplant into even cubes, simply cut eggplant crosswise into 1-inch-thick rounds, then cut rounds into tidy 1-inch cubes.

For media and sales inquiries